by Denis_1610
This thread was marginal in its connection with caring from the outset, and it has become more a consumer affairs matter than a caring one. I have said plenty and have reached the point where it is time for me to bow out.

My prediction is that those who opt out of the cheap-rate variable tariffs available with smart meters will instead be given a flat-rate tariff which will be more expensive.

This is my last post on this thread. Bye, bye! See you elsewhere on this forum.

by Chris From The Gulag
Any thread that may help half the carer army living BELOW the official poverty line in reducing
the costs associated with the " Unholy Trinity " ... eat / heat / roof ... is to be encouraged ?

Smart meter rollout still a " Million miles away " from its 2020 target, with figures showing steady drop off of installations.

Number of households having smart meters installed is falling.

To meet 2020 target now, 2 million smart meters would need to be fitted per month.

Just 14.3m devices have been fitted out of 50m that need to be replaced.

Calls for deadline to be extended as suppliers penalise those who refuse a meter.

Customers accuse energy giants of '" Blackmailing " them by insisting they must install a controversial smart meter to get the cheapest deals.

Many of the 'Big Six' are insisting customers have a smart meter for cheap deal.

Those who refuse are told to sign up for a deal costing hundreds of pounds more.

The cheapest tariff offered by British Gas costs an average of £954 each year.

by James83
As many will know mum and i love our smart meter, we switched from Scottish and southern energy to British gas duel fuel and saved £60 a week in top up. BUT ,,,,,,

British gas inform us we are already on the cheapest tariff available on smart meter , with the price cap.
and for gas and electric we are over £2000 .

With British gas making a HUGE cock up with their new App .. it wont connect to allow for top ups. it crashes , every time you sign in it looks like its a new account you must register as it says "" lets get started "" .
the info it shows is SOOOOOOO out of date for Gas and Electric .

the other day we were down to £12 electric because they app would not allow us to top up, but on the app it stated Electric you have £67 in the meter ..
UMMMM NOPE we dont.

I have called British Gas to complain and was told "" it aint us , its your phone trust me "" ,, someone else said "" uninstall the app , re download it simples "" ...
nope wrong again British Gas , and more and more negative reviews appear on the App download page .

So mum is now considering changing to DD .

According to Octopus if we went with them , we would be saving £340.61 a year ( over the big 6 , if we were DD with them ) . but the site cannot give us a comparison as we are currently Pay as you go meter , so we should call them for further details.
but going through an other comparison site it looks like going to DD could save us a lot lot more than £340 a year.

Just have to do more research , and maybe make a few calls. as mum is worried she would be refused going over to a credit meter.

And I'm, smart enough to know what energy I use.

by James83
Smart meters are not just to show what uses what , but they are helpful for disabled people who cannot go outside all the time. Smart meters also stop the need of meter readings , so someone no longer needs to arrange to enter your home to read a meter.


And smart meters are actually an EU idea , to eventually have "" smart network grids "" , so the idea is each home is given the exact electric it needs , such as a family of 4 would be given more electric and there for charged more compared to a single person who would use less and be charged less for usage. and being "" smart "" is to supposedly allow for real time readings of a persons home , so prices become "" live "" so it no longer became a set standard price.
i say electric , because countries like scotland are planning on scrapping gas , as yet they have not said what they will replace it with ,, they also say eventually 100% of scotlands electric will 100% come from green sources 100% of the time none of it will come from traditional sources LOL

by Henrietta
Getting an SSE one fitted later this month just fo relectric. Hope it goes ok.

Why smart meters have left you steaming: In the bid to force customers to go digital, energy firms are hitting those who refuse with soaring bills

Energy suppliers were saving best deals for those willing to have the gadgets.

Those who don’t want one are punished with pricier gas and electricity bills.

More than 50 letters received by Money Mail were from E.on customers.

Previously, suppliers' deadline was the end of 2020, but energy firms had warned the technology was not ready.

But the extra time could lead to more years of frustration for customers, many of whom are fed up with the new meters they have been given.

It also means the cost of installing the new equipment is likely to rise further, to more than £13bn in total.

Customers are not obliged to have a smart meter fitted, but energy firms must have offered them to all UK households by the end of the new deadline.

The promise of smart meters was that readings would be automatic, billing would be easier, and a new world of flexible charges would be ushered in.

In practice, millions of people found they had new meters which did not work properly if they switched suppliers - and millions more have not been given the technology at all. 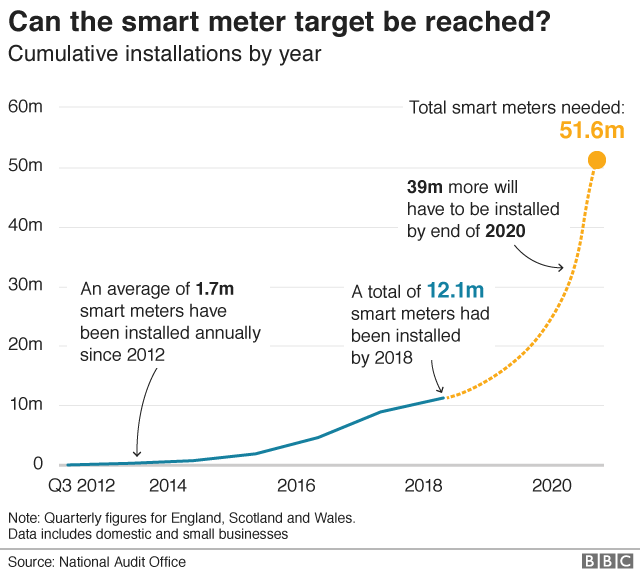 Gillian Guy, chief executive of Citizens Advice, thinks extending the smart meter rollout deadline is a "common-sense move" that is good for customers.

"We've seen some energy companies use aggressive techniques to try to persuade people to have smart meters fitted as soon as possible to meet the existing timeline."

There was a pledge in the Conservative Party's 2017 election manifesto that every household and business would be offered a smart meter by the end of 2020 - and there is still that expectation.

The government is adamant that its targets are being met and that the new regime outlined on Monday does not amount to a let-off for suppliers.

The energy regulator, Ofgem, had a rule that the energy companies had to take "reasonable steps" to fit meters, which left them plenty of wriggle room.

The Minister for Climate Change, Lord Duncan of Springbank, said: "We remain on track for suppliers to offer every home a smart meter by the end of next year, but to maintain momentum beyond 2020 we are proposing strict yearly installation targets for suppliers from 2021. This will deliver even greater benefits for households and reduce emissions."

But it is clear to gas and electricity firms that ministers have recognised reality and allowed them an extension. The new framework gives them until the end of 2024 to install smart meters in at least 85% of their customers' homes.

USwitch.com's head of regulation Richard Neudegg said that public confidence in the smart meter programme had been "badly damaged".

"This is now an opportunity to rebuild trust. In particular, people want proof that the solution which allows older smart meters to stay smart when a household switches supplier is finally available," he said.