by Chris From The Gulag
Had to happen ... eventually ? 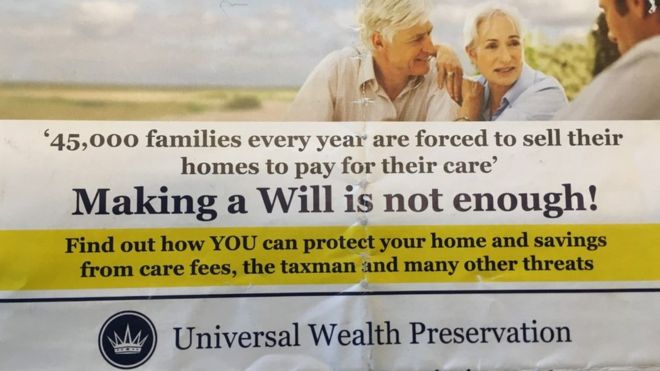 The collapse of an inheritance planning firm that has left dozens of clients fearing for their life savings is being investigated by police.

Universal Wealth Management ran seminars called Keep It In The Family, in which they promised to protect people's assets from inheritance tax.

Two people connected to the firm have been arrested and released as inquiries continue.

After attending a seminar, people typically put their home into a trust run by the company, which meant they no longer officially owned it.

The idea was that local authorities would then disregard the property in the event someone needed long-term care.

The BBC has learned the company first hit trouble in late 2017, when it laid off dozens of staff.

Earlier this year, some clients started to complain but their emails and calls were going unanswered.

In April, two people connected with the firm were arrested on suspicion of fraud. They have since been released but remain under active police investigation.

A Suffolk police spokeswoman said: "Two people who were arrested on suspicion of fraud as part of a large-scale financial investigation have had their police bail cancelled.

"Both have now been released under investigation whilst inquiries are continuing."

The national body that deals with fraud on behalf of victims, Action Fraud, said at least 140 clients of Universal Wealth had contacted it about missing money.

The BBC has spoken to a number of people who appear to have lost significant amounts of cash.

Nigel Watson, from Sabden, near Burnley in Lancashire, attended a Universal Wealth seminar with his parents in 2014.

Both signed their houses over to a Universal Wealth Preservation trust, while Mr Watson's parents handed over £250,000 - their entire life savings.

Mr Watson found out about the collapse of Universal Wealth when he got a letter from a former employee, offering to change the trustees for a fee.

"They were totally in the dark about it," he said. "And I had this bombshell piece of news, which I had to decide whether I told them about or not."

The company has yet to comment. Its offices in White House Road, Ipswich, are empty and 100 staff have lost their jobs.

The investigation will be broadcast on BBC Inside Out East on BBC One on Monday at 19:30 BST.

The first of a few out there.

Not unexpected , where there's money , there will be vultures circling ... kettles of 'em ( Thanks Google ! ) ... ready to swoop.

I hope NOT one reader is affected by this ?

CARE HOME FEES : THE BIBLE ( SUBJECT TO NO CHANGES IN THE BUDGET OR FORTHCOMING GREEN / RED HERRING PAPER ) :

by jenny lucas
No free lunches in CareWorld.....

Although, in general principle, I can see the 'fairness' in making home owners use their assets for their care, there will be a slice of the population who are 'between rich and poor' (ie, asset-wise), and who have had 'spendthrift lives' merrily squandering their money, not bothering to save or buy a property etc etc, who will then blithely qualify for tax-paid care.

Whereas their 'opposite number' - the ants vs the grasshoppers - who have diligently squirrelled away money, gone without holidays to pay the mortgage, etc etc, who will have their houses taken from them!!

I have to say, the government's latest 'wheeze' is scaring me - that everyone pay £30k 'fee' at retirement, to go into a general Care Pot, with the government gambling that half of the fees will never be claimed by those who paid them - ie, that those who paid in, but never lived to take out, will be paying for the care of those who survive to need it.

The 'real problem' of course, is 'infirm old age'. My neighbour opposite is about 90, and still walking to the shops every day. The mother of my SIL's BIL, is living alone in her flat and 'fine' apart from needing a walking stick.

But now, with half of 11 year olds in the country, or whatever, already being obese, those 'healthy pensioners' are going to be come hens teeth. Alternatively, of course, their obesity will lead to premature death anyway, and so they'll never live long enough to need care (like tobacco smokers!)

Society has only two options - invest in 'healthy old age' OR 'make care costs lower' (eg, mass sedation or whatever.....) (sleepy cocoa, anyone????!)

by Chris From The Gulag
........ as laid out in considerable detail on the main GREEN / RED HERRING PAPER : SOCIAL CARE FUNDING thread.

Everything muted so reported EXCEPT FOR the most obvious and equitable solution.

Common sense is no excuse when it comes to preserving power and wealth.

by Henrietta
As retirement age goes up and up and up when are they proposing to take the 30K? Most of us won't reach retirement if they keep pushing it up at this rate.

by Chris From The Gulag
Green / Red Herring Paper thread , ladies ... it's all in there ... that thread could do with some input from others ?

From sheer madness to tinkering with the present system which is well past it's sell by date ... by decades ?

In short , a disaster even before it's announced.

by Henrietta
Thanks Chris
I will have a look.

by Chris From The Gulag
A strong mug of coffee ... at the very minumum required.

Page 1 ... posting 1 ... " Once apon a time " ... identical twin sisters were born ... NHS and Social Care ... as youngsters , there were separated as their parent ( The Government ) could not afford to keep both ... NHS was retained , and constantly fed ... Social Care was left parentless and had to scrouge from the peasants in order to survive ... etc. etc.

WARNING ... your keyboard may be in danger after reading some of the recommendations therein.

I trust my own recommendation is NOT one of them ? 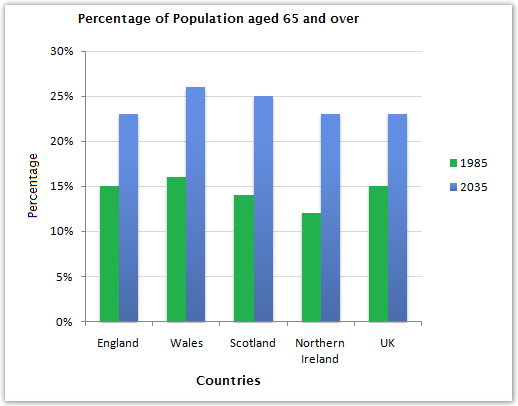 The actual reality of a worker needing to work for two months or more to pay just for the combined State Pension is fast approaching.

In turn , said worker will need to pay more in taxes just for said State Pension to stand still.

Sure to happen as night follows day ... ?

As for our identical twin sisters ... both held together with string and sticky tape ... still NOT reunited ?????????

Just one more fact to throw into the fire,

Since 2008 and ... DESPITE AUSTERITY ... Government borrowing has DOUBLED ... under a CONSERVATIVE Government !

£ 50 BILLION or thereabouts in interest payments per annum ... with Base Rate continuing at historically low levels !

Happy future ... for the dwindling few ?

by MrsAverage
Coming back to the original story...
While putting assets in a trust may make sense for some (and there are on going costs of doing so), GIVING your assets to someone else to put in their Trust was madness. Just the same as giving your assets to any passer-by ...

Advice on trusts and inheritance planning is available from solicitors, usually for a fee that includes drafting the documents. Always take proper legal advice.

by Chris From The Gulag
The very essence of the fraud allegations.

Reducing if not eliminating Inheritance Tax also mentioned as part of the package ... as an incentitve to sign on the dotted line.

Not disclosed in the article ... the Trust ... in the UK or offshore ... the latter could complicate matters , especially if any monies are still left around.

Yet another " Follow the money " trail posted over the years.

Preservation of wealth ... fast becoming a taboo issue ... like child carers and housing ... nothing worse for commencing deep rooted postings from both sides ... chasms in CarerLand ... half of all family / kinship carers close / at / just above the Official Poverty Line ( " The Street " ) ... one to AVOID at all costs !

That it is the number one priority for virtually all governments for the past two centuries IS the issue.

by Chris From The Gulag
More on Universal Wealth Management : 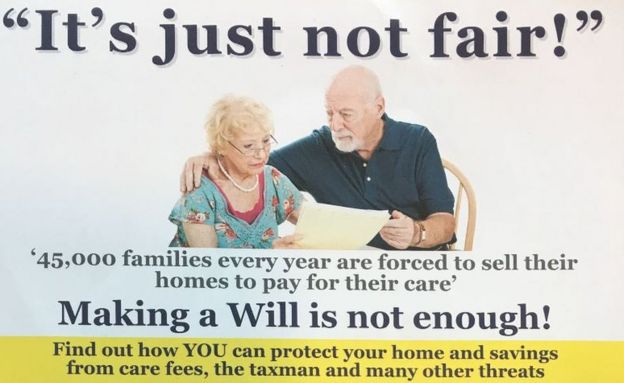 Anyone caught up between those two dates ?


Back in 2011 the BBC was suspicious of the scheme, and mentions:

When the BBC tried to contact Mr Long to put the allegations to him it was told he was out of the country.
He was in fact giving seminars in Southampton and Gloucester.

As you may be aware, this company was featured on BBC Money Box, broadcast on Radio 4 on the 15th April 2017 and repeated the following day on 16th April.

We consider that the content of the programme presented a very one sided version of events, was misleading and did not show this company or the wide range of professional services it offers in the correct light.

In the BBC’s own words, ‘we are one of many firms’ (indeed we are 1 of over 500 firms), which provide estate planning advice and as such feel that we were unreasonably singled out.

The BBC advised us of their intention to broadcast the programme in an email on 29th March. We responded by providing them with substantial evidence to refute their allegations and those of the featured client.


I have some more information about this company/firm and, unfortunately, it's not good news.

Like many others, I have been unable to contact Universal by phone and, given the recent posting on this forum suggesting that the company had gone bust, I travelled to Ipswich to try to find out what had happened.

When I arrived, the metal gates to the premises were locked closed and there was a notice attached which read:

'If you need to contact Universal, please either call us on 01473 808080 and leave a message or send us an email at enquiries [at] universalgroup [dot] co [dot] uk (amended by me)

The site looked rather deserted although there were four cars parked at the far end. While I was there, another car pulled up and the couple advised that they were similarly affected. Then another man came and advised that he ran the business next door and had heard that a number of staff had been laid off, the reason given that Steven Long had suffered a bereavement. He added that the gates were locked all day and only opened at the start of the day when the people arrived and in the evening when they left.

Police are said to be investigating ... the word ALLEGED is appropriate here.