by Chris From The Gulag
ALSO POSTED IN THE MAIN NHS THREAD :

Patients facing " Agonising " waits to start treatment amid a troubling lack of interest from ministers.

Cancer patients in three-fifths of NHS trusts in England are waiting too long for treatment and the devastating effects of delays are being “ignored” by ministers and health service chiefs, MPs have said.

A damning report by the Commons Public Accounts Committee (PAC) said the government and NHS England must regain control over “unacceptable” waiting lists.

It also criticised the “troubling” lack of interest in those left for months without treatment.

Only 38 per cent of NHS trusts and foundation trusts are delivering on the waiting time commitment set in the health service’s mandate to start cancer treatment within 62 days of a GP referral.

Fewer than half are currently meeting the target of carrying out elective care within 18-weeks of a referral – meaning thousands of patients waiting on hip replacements or cataract surgery are being left in pain and at higher risk of falls.

“It is unacceptable that the proportion of patients being treated within NHS waiting times standards is continuing to spiral downwards,” said PAC chair Meg Hillier MP.

“NHS England and the Department of Health and Social Care must regain control.

“The impact on individuals of protracted waiting times cannot be ignored.”

The committee heard from charities that the waits for cancer tests are “agonising”.

Ms Hillier added: “We were troubled by the department’s and NHS England’s approach to waiting times, which seems to be characterised by gaps in understanding of patient harm, hospital capacity and what is driving demand.”

MPs said the government has allowed NHS England “to be selective” over which national standards it focuses on as patient numbers have risen, and health service budgets have failed to keep up.

With pressures at their most acute in A&E departments over winter, those awaiting surgery for less urgent problems have been pushed to the back of the queue and cancer waits have continued to grow, MPs warn.

The NHS is now proposing an overhaul of targets which will instead focus on the most urgent patients, but which critics fear will mean many more patients must wait longer without treatment.

Rachel Power, chief executive of the Patients Association, said: “This is an ongoing and deeply concerning problem with serious consequences for patient care, and it is simply unacceptable for patients to be left in limbo in this way.

“Longer waits always mean more time spent in pain and discomfort, but for some procedures they also reduce the good that the treatment is likely to do for the patient – this must be understood in terms of human cost, not merely numbers, however dramatic.”

Labour shadow health secretary, Jonathan Ashworth, said the report was a reminder that “years of Tory underfunding and understaffing” was creating anxiety and long waits.

“Rather than playing leadership games, it’s time the health secretary focused on his day job and got a grip of the deep problems facing the NHS,” he said.

A Department of Health and Social Care spokesperson said: “Over a million NHS patients start planned treatment with a consultant every month, with the majority seen and treated within 18 weeks, and last year 71,000 more people began their cancer treatment than in 2010.

“We’re providing an extra £33.9bn a year by 2023/24 through the NHS Long Term Plan, which will see the health service grow the amount of planned surgery year-on-year and reduce the waiting list.” 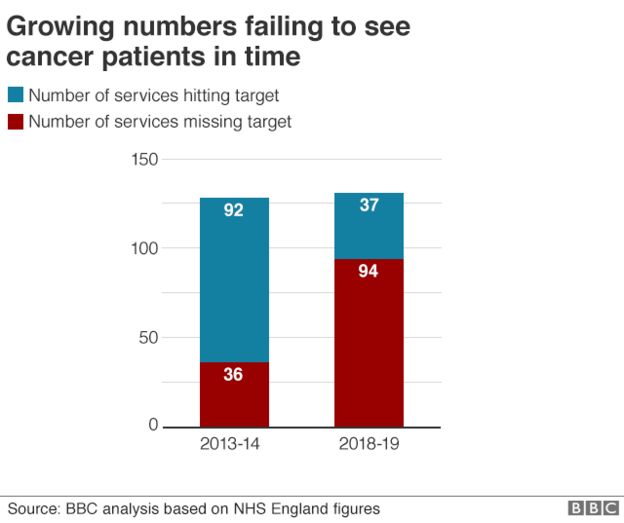 In April alone nearly 20,000 people missed the 14-day target to meet with an oncologist.

Record numbers of cancer patients are waiting longer than they should to see a specialist because NHS services cannot cope with the rise in people suspected of having the disease.

In April 19,963 people in England had to wait more than the 14-day maximum to have their first appointment with a cancer specialist – by far the largest number since records began.

NHS hospitals are supposed to ensure that 93% of all those referred by their GP for suspected cancer see an oncologist within a fortnight. But April was also the first time since the target was introduced in October 2009 that fewer than 90% did so. Performance was just 89.9% – the worst ever.

“When someone is first diagnosed or hears the words ‘we think it could be cancer’, their world often turns upside down in a single moment.

The wait to see a specialist or to start treatment is an agonising time already, and facing further delays can make things even worse”, said Kate Goldie, a senior cancer information nurse specialist at Macmillan Cancer Support. “Those affected experience worry and uncertainty cannot go about their daily lives, while relatives are left feeling helpless,” she added.

NHS England data show that hospital trusts have failed to meet the 93% target in 10 of the last 12 months amid growing demand on, and serious staff shortages, in cancer services.