by Albert_1604
Smart meters. I have a smart brain that knows how much juice I use.

It depends on what way you have the meter read. If they call each quarter to read the meter then it will put a stop to that. I don't actually look at usage on my home unit very often, however a glance now and then confirms all is well. As I said in my post it is in the garage as the wi-fi signal from the E-on sender is not very strong so it won' reach the inside of the house. There are 'horror' stories, i.e. rumours about the control it gives suppliers but these are basically unfounded.

by jenny lucas
I wouldn't touch them with a bargepole! They are desperate to foist them on to us, simply so THEY can manipulate the price of electricity such that knowing when we use it, and how much of it, they then up the price when we use it and drop it when we don't.

The meters don't transfer to other electricity suppliers either, so it's yet another way of not letting customers 'escape'.

As others say, be sensible in your usage - turn off lights in rooms you don't occupy, don't over fill the kettle, etc etc etc. It really isn't rocket science!

The whole stupid scheme has been one of the daftest things the government have come up with (and they come up with a LOT of daft things).

If you worry about your eventual electricity bill, just get into the habit of reading the meter first thing before breakfast. Then tot up what that will cost you per day. Remember companies charge a daily 'connection fee' so you pay that whether or not you have a single appliance plugged in!

by jenny lucas
There is NO legal obligation to have one - and just refuse entry to anyone trying to get in and install one. The law is entirely on our side in this.

by James83
Jenny , electric supply companies have ALWAYS been able to see what is used and when used per area.

I have to say my sister cant stop thanking mum an i for getting her onto a smart meter it saved her hundreds.

And the first thing the book states that came with our meter , ANY company you transfer to can use your current smart meter .
as confirmed by CAB.
CAB informed us the problem is with the older first gen smart meters , but if you have the newer models of smart meter there is / should be no issue.


as much as people love shooting the UK government down at every given chance , smart meter roll out is and was an EU project

The EU aims to replace at least 80% of electricity meters with smart meters by 2020 wherever it is cost-effective to do so. This smart metering and smart grids rollout can reduce emissions in the EU by up to 9% and annual household energy consumption by similar amounts. To measure cost effectiveness, EU countries conducted cost-benefit analyses based on guidelines provided by the European Commission.
they are also planning in bringing out separate gas smart meters
and the smart grid is to work along with wind / sun power supplies that would eventually read smart homes to feed the needed power source to each home so no power is wasted.

by Chris From The Gulag
Interesting little snippet from the Daily Chuckle ( Aka Mail ) ... scaremongering ?

Energy giants could use new smart meters to cut power to homes and force customers to pay their bill before turning it back on... as former energy minister reveals he got rid of his

In the past, the Big Six have proven far too eager to force expensive pre-payment meters into people's homes – despite Ofgem warnings that they should only ever be used as a last resort.

'If they can switch someone to a pre-payment meter with a flick of a switch whenever they choose, this is very worrying for families across the country already struggling with unfair price rises.'

I love the " Prepayment " element ... the bane of the BTL market ... especially if your " Catherine Wheel " goes through the landlord's one first !

Eight days ago , PayPoint went down ... hundreds of thousands of people on prepayment meters could not top them up.


PayPoint DOWN: 1.4 million left without gas and electricity.

UP to 1.4million have been left without electricity and gas after PayPoint went down.

Some BTL landlords don't help either ... taking their cut from the tenants' electricity bill ... and having the final say as to which company supplies the electricity ( So much for switching ? ).

Might be helpful to those stuck with pre payment or fighting off having them put in.

by Chris From The Gulag
Several million too late for many BTL / social housing tenants.

Under the vast majority of leases / tenancy agreements , the landlord's permission to have a meter changed is required.

I had to do so just to have my standard meter ( Not a prepayment one ) upgraded last year.

If there is anything " Dodgy " going on , those landlords will withhold permission as it's in their interest to do so.

Any tenant wanting to challenge a landlord's decision would be ill advised ... a standard BTL tenancy is for 6 / 12 months ... and in many areas , demand comfortably exceeds supply !

The words STABLE DOOR and HORSES spring to mind.

Plenty more on both the main HOUSING and ENERGY threads on these evil critters.

Not to mention the offer of a HOUSING STICKY ... BTL and social housing will be featured heavily ... mainly the stuff you won't find in a textbook !

Don't ask ... or I will recite what happened 'ere in my own complex !

An English person's home is his / her castle ... only if the freehold is owned ... and not in the way of a new road / rail scheme ! 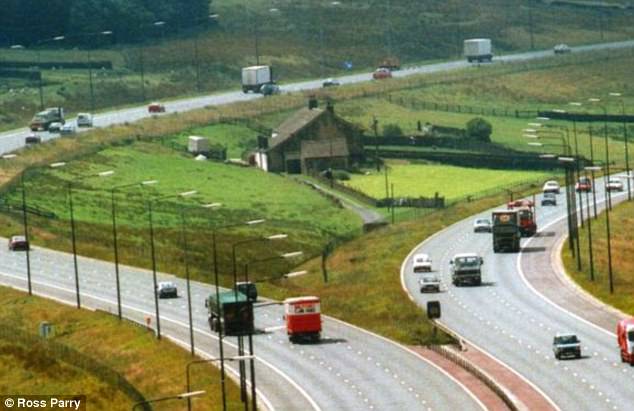 by James83
well i guess people will have to eventually give in and take them regardless , especially if we are still hooked into the EU and how deep the hook hold is.

Because they are working towards full smart grids that will know each and every single house hold power usage , supposedly this is so each home can use its own power and not be tied to a set bill limit as currently depending on location.
they even had talks of Brussels setting a unit for power for ALL of EU.

as for the farm pic , plenty of places like that ALL over the world , several farms in scotland find them selves having to cross some of the busiest most dangerous roads to get from their home to field.
in america homes find them selves under bridges on the busiest freeways .

we have no issues , sister has no issues and friends of the family who changed after talking to us also have no issues.
so something must have went wrong for us that they are working as intended lol.

same can be applied to water meters , they are a huge topic on a salt water fish forum ,, new people coming on and asking how expensive are salt water aquariums if you live in an area that has a water meter .....
the answer :-

some with HUGE salt water aquariums have stated it costs them 40p to fill their entire tank ,
others have said it cost them a £1 to fill their small aquarium .

this is because salt water aquarists need an item called RO unit and water companies have called customers up asking if they have a leak , because an RO unit runs for a day to create pure water and also produces waste water that some collect to water gardens with.
so some companies when they have been told its because its an RO unit and not a leak they put a not on the system so no one calls any more .

From something i read a good few years ago , Prepayment meters are far more commonly used in Scotland than anywhere else in the UK.

our smart meter is pay as you go / newer version of key meter , this is because mum has a fear of using more than has been "" estimated "" from the power supply company.
she loves being in complete control of how much goes in , what she has used , estimated to use , and no 2 days are the same in this homes power usage.
we changed from SSE to british gas duel fuel and already saved £60 a week , plus British gas put mum on the warm home discount because of her age and they were shocked to hear SSE had told mum she was not entitled to it , and they also put mum onto the priority list because of her age and disability .
All times are UTC+01:00
Page 2 of 2
Powered by phpBB® Forum Software © phpBB Limited
https://www.phpbb.com/