A leak which forced the HMS Queen Elizabeth aircraft carrier to return to port saw water rise " Neck-high " in flooded areas, the BBC has been told. 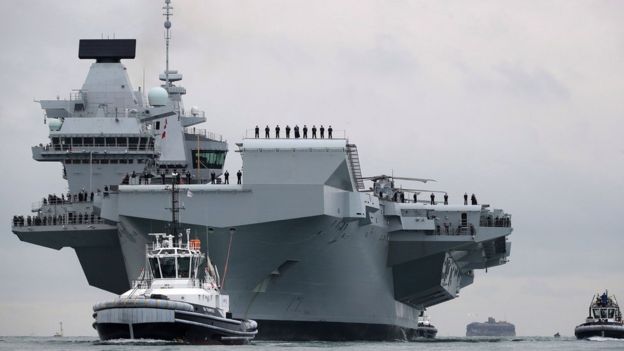 A leak which forced the HMS Queen Elizabeth aircraft carrier to return to port saw water rise "neck-high" in flooded areas, the BBC has been told.

The biggest and most powerful warship ever built in Britain experienced the leak during sea trials on Tuesday.

It was believed to have come from a ruptured pipe which caused some internal damage, the BBC learned.

The Royal Navy described it as a "minor issue relating to water from an internal system" on the £3.1bn ship.

On Wednesday a Royal Navy statement said the ship had returned early from sea trials as a "precautionary measure" with an investigation into the cause underway.

It said: "At no point was there damage or breach to the hull. The issue was isolated as soon as possible and all water has now been pumped out. "

The BBC's defence correspondent Jonathan Beale said the leak was "more serious than most".

He added: "A source told the BBC that in some compartments the water was neck high."

The BBC has contacted the navy for further details.

The Royal Navy's future flagship had been due to return to Portsmouth for planned maintenance.

The ship has suffered a number of other issues including a shaft seal leak, which caused the ship to take on 200 litres of water every hour, and the accidental triggering of the sprinklers in the hangar.

In May the captain of the aircraft carrier was removed from the ship amid claims he misused an MoD car.

Be interesting to see said boat in it's first action ?

Sailing up whichever river to help quell the riots once all the UK has been infected by Universal Credit ???

Re: 3 BILLION + For An Aircraft Carrier ? Fully Equiped Except For Two Important Items ? Wellies & Rubber Suits !

UK’s largest warship departs for joint military exercises with US on Friday.

The £3bn warship had to be recalled from sea trials in July after 200 tonnes of water spilled from a burst pipe.

But Captain Steve Moorhouse insisted the navy’s largest ever warship was “ready to sail” as it prepared to carry nearly 1,500 people across the Atlantic on Friday.

The 280m carrier left Portsmouth at midday to take part in joint military exercises with the US along the country’s east coast, alongside fighter jets, helicopters and other warships.

“The design is absolutely world class but it’s inevitable that seals and valves can fail if you haven’t run systems for years, it’s not a surprise.

“Floods are part of the business, the really reassuring thing is that my sailors responded exactly as you would want them to, so all done and dusted, we are ready to sail.”

The July incident is not the first flood reported on the carrier in previous years. In 2017, weeks after the Queen commissioned it into the navy, it suffered a shaft seal leak, which reportedly let in 200l of water each hour, costing millions of pounds to fix.

A Ministry of Defence spokesperson insisted on Thursday that while “minor repairs continue” and “cosmetic after-effects remain, these do not affect the ship’s safe operation”.

“After the flooding incident that took place in HMS Queen Elizabeth last month, engineers have worked hard to resolve the cause of the issue,” they said. “The flood itself caused damage to a ‘service trunk’ and some of the pipework contained within it. In all cases, affected pipework has been repaired.”

The ship set off from Portsmouth naval base just after midday.

Before its departure, defence procurement minister Anne-Marie Trevelyan stood onboard and declared that even had it been in operation, the ship wouldn’t have been deployed to defend Britain’s interests in the Strait of Hormuz in July.

Referring to Iran’s seizure of a British oil tanker, Ms Trevelyan said the vast warship would not have been necessary to deter “cheeky Iranians in their little fast boats”.

£ 3 BILLION ... let's all hope that there are no icebergs around ???
All times are UTC
Page 1 of 1
Powered by phpBB® Forum Software © phpBB Limited
https://www.phpbb.com/