by Chris From The Gulag
The ultimate slap in the face if your caree / friend / associate dies without leaving enough to cover the funeral ?


Poorest families 'being barred from funerals of relatives' because they can't afford to pay for them.

Council tells loved ones they are not allowed to attend or have ashes if they cannot pay for a service.

Some of the UK’s poorest people are being barred from attending the funerals of loved ones as part of council cost-cutting, it has been claimed.

Families who must reportedly rely on publicly-funded funerals are told they cannot be at the service.

An official at Bracknell Forest Council, in Berkshire, was recorded telling undercover reporters that relatives would not even be told when the burial or cremation was taking place, according to The Sunday Times

“There’s no attendees, no keeping of the ashes,” the official is reported to have said. “Nobody’s invited, you don’t have any say at all.”

The average funeral costs £4,078, pricing out increasing numbers of families.

Councils offer a public health funeral – the modern equivalent of a Victorian pauper’s funeral – for those who cannot afford. About 4,000 people are buried or cremated this way every year, costing local authorities an estimated £4 million.

The refusal to allow people to attend seems to be a way of keeping costs down and discouraging families from using the option except where financially unavoidable.

The new claims follow similar revelations in March when the same newspaper found children had been placed in mass graves.

He told the newspaper: “Even Dickens’s Mr Gradgrind would have been hard pressed to justify such treatment. This would make red-faced even the worst of the Poor Law commissioners of the 19th century.”

Bracknell Forest is the first case of a council being exposed as barring relatives, although there is some suggestion the practice may be more widespread.

The official quoted is said to have advised the undercover reporter she should negotiate with the funeral director or apply for government aid – although the latter is only available after the service takes place.

Steve Loudoun, environment and public protection officer, said the council had a "fair and appropriate policy regarding Public Heath funerals."

He said: "We have provided for the needs of the bereaved for many years and are very sensitive to the issues that arise at such times. If there is evidence to suggest otherwise, we will investigate as a matter of urgency.

"If our policy needs to be corrected to make it clearer or to address any valid shortcoming we will do so.

"We have no desire to deny anyone, with a reasonable right, the opportunity to say farewell to a loved one... however Bracknell Forest Council does not fund a formal funeral service as standard."


Some may argue that a pauper deserves a pauper's funeral ... ( A few Daily Chuckle ( Aka Mail ) readers amongst our ranks ) ... why not a simple lime pit job to cut costs to the tax payers even further ???

Perhaps a few might even wonder just what type of society we all have to survive in ???

Either way , the only one without a viewpoint is now engaged elsewhere ... In a multi storey , unmarked , grave ... with or without a box for company ... ever seen a poor funeral director ? ... or simply scattered by the winds to all points in their local manor.

Even a lime pit exit may be at risk if the price of lime keeps rising.

Subject to the green lobby , a viking's funeral on offer from the cash strapped LAs ?

Perhaps a mass one on Guy Fawkes night ... in certain parts of Northern Ireland , 4th. July ?

Now that really would cut costs ... which is what this issue is all about !!!

by MrsAverage
My understanding of the public health funerals are that the decreased is delivered to the crem in a plain van and cremated without any service or ceremony in between other funerals when there is a convenient time gap. So there is no way anyone could be informed becuase the time and date aren't known until last minute and there's nothing to see or do anyway.

Food for thought if you don't want a loved one to be unceremoniously disposed of. Either they save for their own funeral or family/friends/charity has to pay.

by bowlingbun
I'm ashamed of the society in which we live. Truly appalling. Where's the common decency, respect for the dead? There might be no money left because every penny has been spent on the care of that individual over many, many years.

by Chris From The Gulag
At least , for some , there is some financial help out there :

For child funerals , one positive piece of legislation from this Government :

As for the future , and the increasing shortage of land for traditional burials :

As for the fairly new idea of alternative burials ... still 20 / 30 years behind the USA in this :

One deceased member of our local Astronomy society had an " Enviromentally friendly " burial only last year.

by Chris From The Gulag
Shades of the restoration of local lime pits ... even a Soylent Green scenario or ... the early morning horse and cart and that sound of hooves on cobbled streets ... that infernal bell sounding ... and a hallowing voice ... " Bring out your dead " ... ?

Perhaps not THE plague but ... Universal Credit comes pretty close !

A Freedom of Information request, by insurance company Royal London, found 275 local authorities spent £5,382,379 on public health funerals in the 12 months up to April 2018.

More than 3,800 of the funerals, for people who have died alone, in poverty or without relatives, were held.

The Local Government Association said the funerals were stretching budgets. 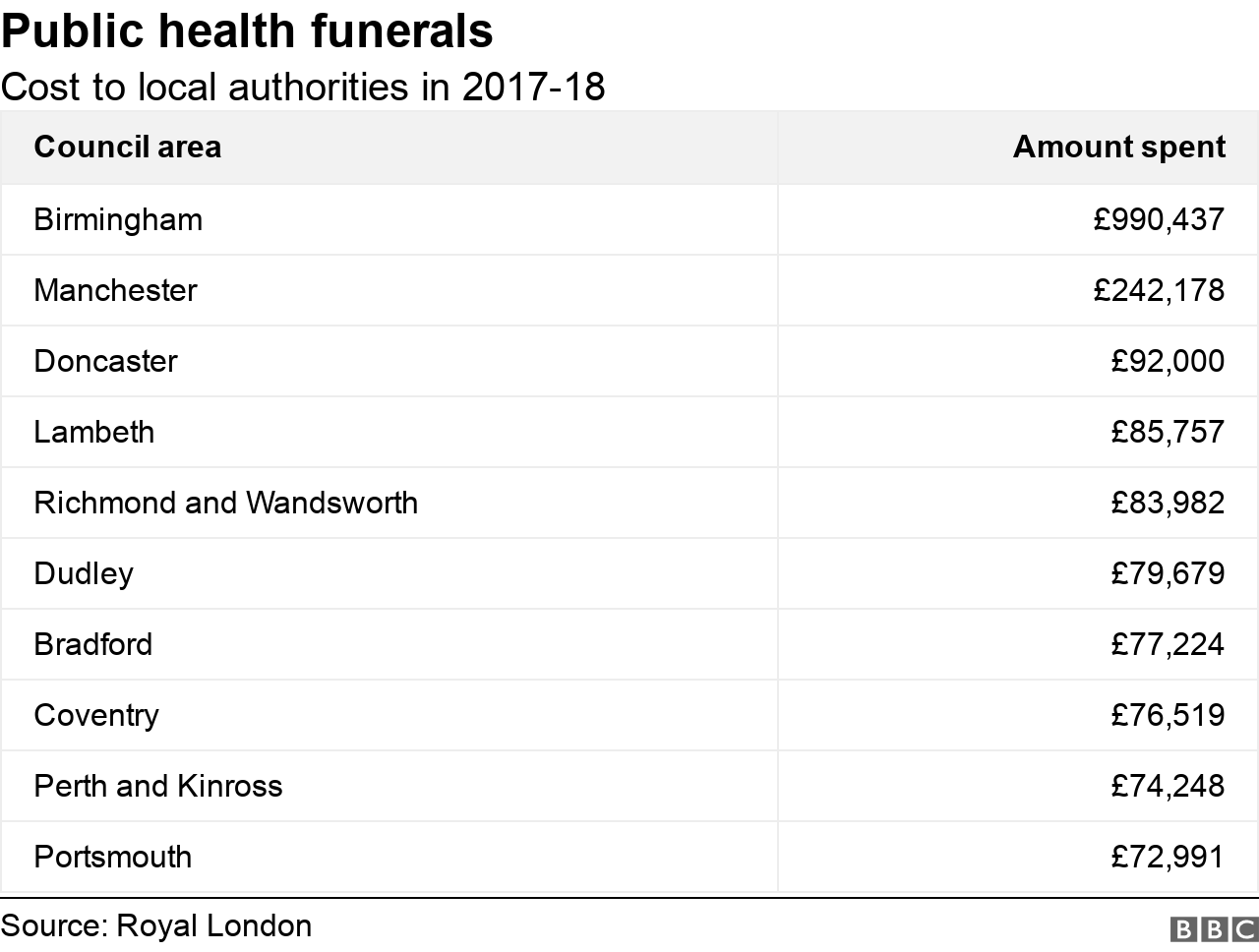 The city paid for 395 funerals in 2017-18 - about one council-funded funeral for every 22 deaths, which was the third highest rate in the UK.

A Birmingham City Council spokeswoman said: "As the largest local authority in the UK, Birmingham's spend on public health funerals will inevitably be higher when compared to other cities, reflecting the population it serves."

What are public health funerals?

Local authorities are required by law to arrange a public health funeral when no suitable arrangements have been made for a deceased person in their area.

The services, known as a "pauper's funeral", typically include a coffin and the services of a funeral director.

Family and friends can attend but the "no frills" service does not include flowers or transport for family, and some council burials take place in an unmarked shared grave.

The funerals cost councils across the country an average of £1,403 last year.

Birmingham City Council cabinet member for health and social care councillor Paulette Hamilton said: "Everybody deserves a dignified funeral, and it is really important as a city when someone dies we give them the best possible send-off that we can give to ensure they come to a dignified end."

She said the number of public health funerals in the city was "disturbing" and symptomatic of "high inequality" in the city.

Ms Hamilton said she hoped the statistics for the current year would show the numbers had fallen. But she added there were "more people slipping into that poverty trap".

"So it is important we have that resource there to bury them," she said.

The amount spent by local authorities on public health funerals in 2017-18 increased by 3.5%, compared with the previous year, based on those councils that provided figures for both years.

Cliff Rich, deputy chief executive of charity Contact the Elderly, said the traditional concept of families living close together was "fading" and the problem of loneliness and isolation among older people was "only going to worsen".

"I don't believe that we are a less caring society but that we are a busy society and that the idea of community is not as strong as it once was," he said.

"But there are small things that each of us can do to make a real difference."

He said volunteering for a charity such as his organisation could have "a huge impact, help build community bonds and tackle isolation".

The Local Government Association said the figures portrayed a worrying picture of isolation and loneliness across the country.

A spokesman said: "The increase in these funerals are an extra pressure on over-stretched council budgets which pay for them.

"Councils are facing a funding gap of £3.1 billion by 2020. The figures also mask the number of funerals paid for by the NHS when people die in hospital."

Tower blocks ... shutes , on all floors above ground level , to the large bins at the bottom ... and the lift out of action ?