Carers Pay to travel in London

by bowlingbun
Hampshire issue a Companion Bus Pass to someone who needs a carer to travel with them at all times.

For many years, my son and I travelled on the West Somerset Railway, he paid full price, I was free. This year they had removed the "carer goes free" option. Fortunately, it was quiet, so I chatted to the man in the ticket office. He said the option had been removed as it had been badly abused, especially people saying TWO carers were needed. Real shame. Anyhow as I'm also a pensioner and was pleasant, I still had some discounts!!

by Chris From The Gulag
Yep ... i was challenged earlier to do some research as to free travel for carers within certain LAs ... identify those that do and those that don't.

Almost impossible task unless I surfed into every LA out there ... so , apologies for not doing so !

Back to the maths.

Probably put 4 / 5 times as much monies back into CarerLand than " Fairer For Carers " would add to it.

Perhaps more importantly , those at the lower end of available resources ... namely no car or access to one when needed ... would benefit the greatest ... CA is NOT means tested ... yet.

by Chris From The Gulag
An analogy ?

Spaceship ... trying to reach the speed of light ... the nearer it approaches , the more energy it needs to expend.

A final push by those who are reading this posting but have NOT signed ???

That really would be an achievement !!!

Still , this Issue , together to the 21 Hour Rule one , remains on our radar even if nothing appears to be happening out there.

When combined , would produce more of a benefit to carers than increasing Carers Allowance ... even if that was doubled
... even trebled !

by Chris From The Gulag
Forthcoming forum session on Benefits and Community Law.

I have taken the opportunity of bouncing the DISCRIMINATION BY ASSOCIATION element off CUK's representative.

Diarise forward to record what transpires.

by Chris From The Gulag
As anticipated :

Hi there, thank you for getting in touch. There is protection for disabled people against discrimination under the Equality Act, as well as for their carers in certain situations (called discrimination by association). You can read more about this, including what to do if you as a carer or your caree faces discrimination, here: https://www.carersuk.org/help-and-advic ... -act-2010I
Danny

WE ARE ON OUR OWN FOR THIS AND THE 21 HOUR RULE ISSUE.

Ideals as to the far forward pending Brexit disappearing from the House agenda greatly appreciated !

by Chris From The Gulag
Amanda's petition ?

There again , what petition involving carers has EVER sparked a change in any part of the system ???

by Chris From The Gulag
Liberal Democrat plan would give 800,000 young carers a free bus pass.

EXCLUSIVE : Ed Davey, himself a former young carer, said it was time to 'right the wrongs' of system which doesn't support people who look after loved ones.

Alongside the plan for free bus travel, the party is proposing a raft of new policies include reforming the Carer's Allowance so young people who are in more than 21 hours a week of education can qualify for the cash.

by Chris From The Gulag
Amanda's petition highlighted again by Butterfly :

Nothing in CUK's very own general election manifesto on this important campaign.

As mentioned previously , why not dress up as a guide dog and demand the same rights to travel free with one's caree on the 21 November ?

by Chris From The Gulag
Progress ???

Sadiq Khan has kickstarted his bid for a second term as London mayor by pledging free travel on the city’s transport for anyone accompanying a disabled person.

The promise came on the same day as rail passengers nationally were hit with annual fare increases, this year averaging 2.7%.

The pass would provide free travel for anyone accompanying a disabled person on all services including the tube, Overground and buses.

Although he is consistently polling better than his closest challenger, the Tory candidate Shaun Bailey, over the last 12 months Khan has been criticised for the capital’s rising crime rates and knife crime. His personal popularity ratings nosedived to their lowest ever in the summer of 2019.

Travel is a traditional battleground for mayoral candidates, with transport and making the capital more accessible a key part of Khan’s pitch to voters before May’s election.

Khan said: “My job is to stand up for all Londoners. I want to ensure everyone in our city can access our fantastic transport network, and that travel in the capital is inclusive and affordable.

“The companion pass is intended to make a big difference to disabled Londoners. It will help them to move around our city more easily and take advantage of all the fantastic opportunities London has to offer.”

He boasted of freezing Transport for London fares for four years in a row under his leadership and rolling out his “hopper” bus fare, which provides unlimited travel within a one-hour period.

He said if he won the 2020 race he would instruct TfL to work closely with disability and accessibility groups as well as London councils to draw up details of the proposal.

It is expected that anyone with a disabled persons’ or older persons’ freedom pass who also requires a companion in order to travel will be able to apply for the new pass. It would be issued to the person who needs assistance so it could be used by different family members, friends or carers.

“The provision of a companion pass is an access requirement, in the same way as a lift is; without it, many disabled people simply cannot travel as they can’t travel alone.”

Khan described the battle for London as a two-horse race against Bailey. YouGov/Queen Mary University London polling this autumn put Khan on 45%, Bailey on 23% and the independent candidate Rory Stewart – a former Tory secretary of state – on 13%.

The Liberal Democrat candidate, Siobhan Benita, will hope to improve on the party’s showing in 2016 when it achieved 4.6% of the vote. The Green candidate, Siân Berry, who is running in 2020, was third at the last election with 5.8% of the vote.


Sounds fine ... if ever implemented ? 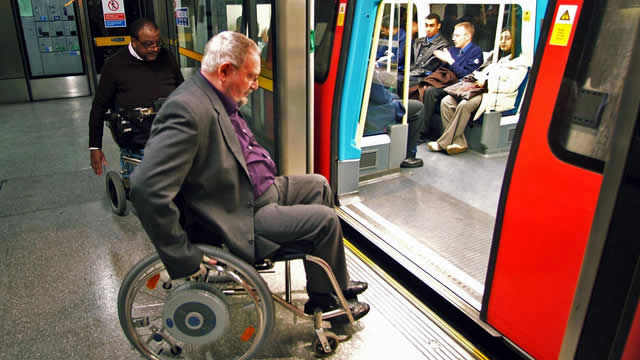 ( In my time in The Smoke , I have seen carers balancing their carees in wheelchairs down escalators ... only way to access at far too many stations. )
All times are UTC+01:00
Page 17 of 19
Powered by phpBB® Forum Software © phpBB Limited
https://www.phpbb.com/